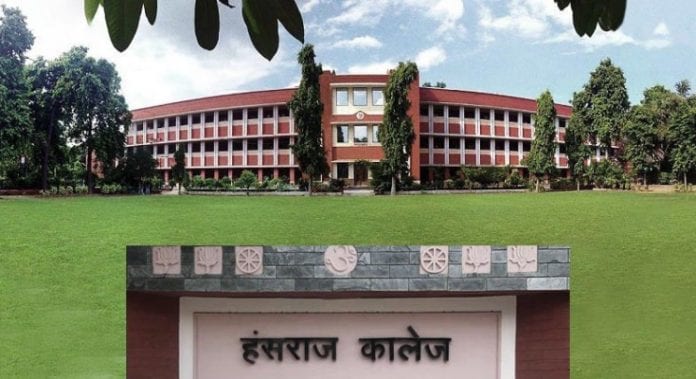 A very legitimate question that you must have is that why out of all the colleges and DUSU Election , we are publishing this majorly Hansraj College Specific article. Of course, Shahrukh Khan is the primary reason but then there are special things unfolding in the college this election season which demand a special coverage.

What makes this DUSU Election special for Hansraj College?

This is an election of many firsts for the College.

The first Presidential Debate in history of  the college.

The first female candidate contesting for the post of a president in nearly two decades.

The first time, atleast  in the past few years, when there are actual discussions about the merit of the candidate and not only about panel rivalry.

Probably the first time when the influence of the Hostel on college politics has been mostly sidelined.

Something unprecedented and unexpected happened a week ago when the Hansraj College administration agreed to holding a debate to the presidential posts.
Although there had been demands in the past two years for the debate to take place (the most prominent of them being the one raised by The United Panel, an alternative politics front which came into a transient existence in 2017 but failed to manifest into an electoral option), the college administration had remained adamant against the idea. However, this year’s Presidential candidate for DUSU Election, Anupam Priyadarshi, succeeded in convincing the college administration to hold a debate on the 9th of September.
What makes this really significant is  that this comes at a time when at the start of this year’s session, the college’s Principal, Dr. Rama had warned the new students against participation in any kind of politics, including posting content criticising the college on social media platforms.

Contrary to popular perception, the auditorium was filled to the brim. Many of the students described the crowd to be more in numbers than even when Anurag Kashyap or the Nizami Brothers had been on the stage.

Each candidate of the DUSU Election was given a five minute time on the microphone. The sequence of the speakers was decided by random selection of named chits. The address of the teacher in charge at the start of the debate was met with huge applause from a packed house.

Mr. Deshwal’s speech, very straightforward in approach was successful in elaborating and reiterating the main points from their manifesto, which he referred to as ‘The 10 pointer’.
He also attacked his counterparts, questioning the incumbent panel’s candidate Ms Vaani Nautiyal over her panel’s performance over the last year and took a dig at Mr. Priyadarshi by calling him a ‘shaayar‘ who has no role to play here in college politics.

Some of the highlights of his ‘Ten Pointer’ which received loud cheers from the crowd were:
• WiFi Connectivity throughout the college
• Affordable gym prices + lady trainer
• Collar mics and sound system for classes
• Fees Reconstruction

Claiming herself to be a whiff of fresh air in the political landscape of college, Ms Vaani, the sole female presidential candidate of DUSU Election in this year’s elections, took a more analytical approach in her speech.
Taking a jibe at Mr. Deshwal, she labelled the contest to be only between her and Mr. Priyadarshi. She took a very humble approach towards Mr. Priyadarshi and did not shy away from giving him the credit for the Presidential Debate. The only point she said that went against him were his lack of a strong team, which is a prerequisite for an effective union.
She constantly blamed Mr Deshwal’s  Revolution Panel for defacing the image of Hansraj College in the eyes of Sponsors, which made work for her panel’s union extremely difficult.
She talked about ‘MODIFY’, an acronym for major points in her manifesto, which includes Inclusive environment and  Digital Hansraj among others.
Her speech was interrupted by a scuffle between certain groups standing close to the stage.

An MA 2nd year student, Mr. Priyadarshi’s speech was very well crafted which can be attributed to his illustrious career as a debater. He left no chance of taking credit for the Presidential Debate, which he claimed as the first victory in an year long journey. Rather than talking about a specific manifesto, he said his politics would be about fulfilling the vision of every student of the college.
When his speech was interrupted by another dispute between some students, he pointed towards them stating this is what we want to remove from the politics of Hansraj, hooliganism and muscle power. Talking about his counterpart, Ms Vaani he said that she has been receiving threat calls and his politics aims at tackling that very problem, which was received with an applause from the packed auditorium.
In the end, he retorted to the attack made on him by Mr. Deshwal by reciting a ghazal which again was met with laughter and applauses.

The debate was interrupted by scuffles between students and also by the administration twice which was unsolicited. Although, the exact impact of this debate will only be reflected in the results tomorrow, this surely marks the start of a new narrative of politics in the college and is something that must be celebrated.

Also, we, at DU Updates would encourage all of you to come and vote tomorrow for DUSU Election. Besides giving you attendance for a day, this is going to give you a representation which you can hold accountable at the end of the day. Happy Voting!