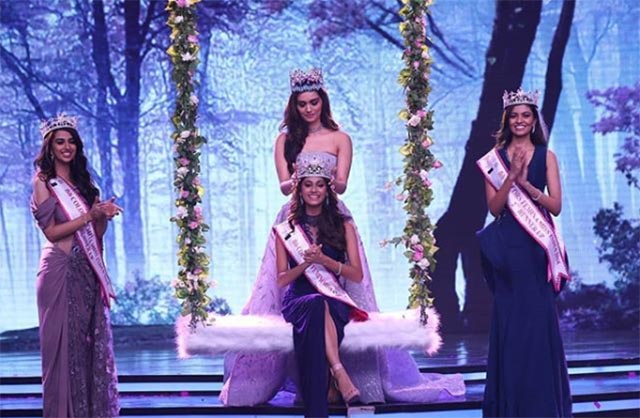 Miss Anukreethy Vas from Tamil Nadu was declared the winner of the 55th edition of Femina Miss India 2018 pageant held at Dome, NSCI Stadium whereas the first and second runner up positions were bagged by Miss Meenakshi Chaudhary from Haryana and Miss Shreya Rao from Andhra Pradesh respectively.

The winners were crowned by the previous year winners, Miss World 2017, Manushi Chillar, Miss United Continents 2017, Sana Dua and Miss Intercontinental 2017, Priyanka Kumari for the respective titles to the end of the event.

Winner Anukreethy Vas who hails from Tamil Nadu is a 19-year-old student pursuing BA in French from Loyola college and her interest lies in modeling and acting. Vas will go on to represent India on international beauty pageants.

The show was massive as top celebrities graced the event which witnessed beauty, elegance and glamour. Femina Miss India 2018 also crowned the Mrs India title on Madhuri Dixit Nene as she sang a song on stage exhibiting how multi-talented the Dhak-Dhak girl is. Bollywood Director Karan Johar and actor-singer Ayushmann Khurana were seen hosting the gala night which saw 30 participants in the run to win the coveted title.

The contestants were dressed in Indian designer Gaurav Gupta’s collection for the finale. Top 12 were shortlisted from the 30 participants to enter the Question & Answer round of the Miss India 2018 finale. From the 12 shortlisted, five state winners entered the top five to compete for the title by answering the question- “”Who is the better teacher? Success or Failure?” The top five contestants are Miss India Delhi, Miss India Haryana, Miss India Jharkhand, Miss India Andhra Pradesh and Miss India Tamil Nadu.

Bollywood actress Jacqueline Fernandez, Kareena Kapoor Khan and Madhuri Dixit Nene performed to some bollywood numbers to entertain the audience and ease out the stress among participants which further added to the glitz and glamour of the event.