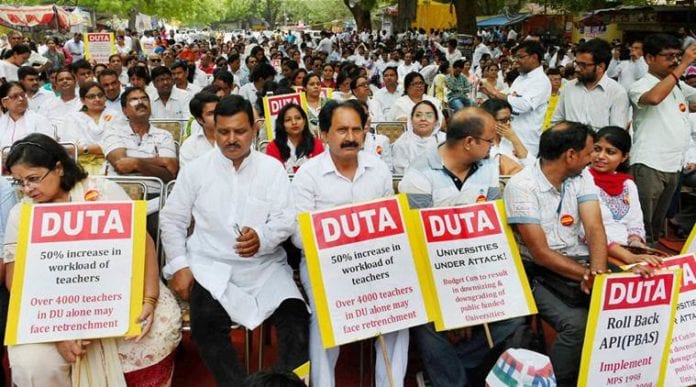 The Delhi University Teachers Association (DUTA) stated on Sunday, 4th April 2020 that they will go back on strike from April 12. However, it will only be reconsidered if the university fails to take any concrete steps to safeguard the interests of colleges and teachers.

The association had been protesting for over three weeks in March. They are against the appointment of the senior administrative officers and the issue of a ‘Pattern of Assistance’ document present in the 12 Delhi government-funded DU colleges.

The statement in the official letter by DUTA:

The Delhi University Teachers Association (DUTA) did submit a letter to P C Joshi, the DU’s acting Vice-Chancellor. The letter demanded the Delhi University to take concrete steps and ensure that the 12 colleges are governed within the framework of DU Acts and Ordinances.

The letter stated, “The association has been contacted and it was decided that the strike will resume from 12th April 2021.” The DUTA strike that had been continued for 3 weeks in March did end on 31st March. Hence, teachers had returned to classes from April 1. However, they need their demands to be considered soon.

The demands of DUTA:

The association further demanded that the varsity convenes an emergency meeting of the Executive Council. Hence, they want the Council to pass resolutions against Pattern Assistance and the appointment of Sr. AOs in the concern 12 DU colleges. DUTA also raised demands to revoke an order from the Finance Department of the capital’s government. Thus, they want to grant the senior AOs additional charge over the 12 colleges.

The association also requested the DU Vice-Chancellor to organize a meeting with them. This will update them on the latest developments in the matter.

The DU Vice-Chancellor did write a letter to the Finance Department on 24th March 2020. He also held a meeting with the Deputy CM, Manish Sisodia on April 1. Hence, they discussed the resolutions of pending issues and collaboration for quality education.