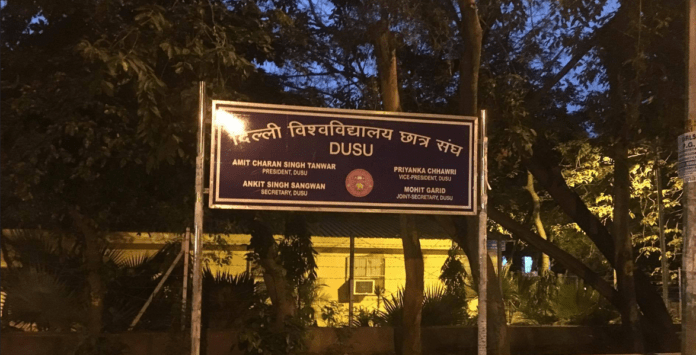 Delhi University Students Union (DUSU) released an official statement on 30th September 2020 launching a new drug-free India campaign. This whole idea was released in a statement form on the social media platform of Facebook by the association. The union demands a comprehensive and elaborate form of discussion on this heating issue of Drug intake. They want the youth of India to be safe from the shackles of narcotics and establish a Drug-free, Natural, and Healthy India.

Akshit Dahiya, the president of DUSU along with Pradeep Tanwar, the vice president, and Shivangi Kharwal, the general secretary agrees with it. They have mutually decided to campaign against this thriving malice of society.

What does DUSU’s official statement say:

The Indian youth is being constantly indulging in the malpractices of taking narcotics. Delhi University’s crowd comprises these young men generally aged between 17 and 24. Roughly 3-4 lakh students comprise the crowd of the varsity and the majority of them are involved in either drinking or drugs. Narcotic intake and intoxication have been an age-old problem in the varsity which has been fanned by the current Bollywood crisis. Hence, an awareness program is the need of the hour. The Delhi University Students Union(DUSU) aspires to lend its wholehearted contribution and initiate this “Drug-Free, Natural And Healthy India” program. Hence, this campaign focuses on the elimination of drug and alcohol consumption amongst the students. It looks forward to establishing an all Natural and Healthy India.

The Union says, “Bollywood is leaving a very negative impact through its reel and real stories.” That is, the case of Sushant Singh Rajput has exposed the ugly and negative side of the industry. We see how celebrities are involved in the consumption of narcotics. Hence, this is leaving a very bad impact on the students who try to impersonate them.

Words of the DUSU President:

Akshit Dahiya, the president of DUSU said, Investigation into the Sushant Singh Rajput case has brought to our knowledge the linkage between celebrities and the drug mafias. This clearly highlights the dreadness of these drug consumption problems. He further adds, “ The case should be thoroughly investigated, and the delinquent should be punished. Spreading awareness is the need of the hour. Hence, DUSU will initiate this “Drug-free, Natural, and Healthy India” campaign and seeks full support from the students.

Why did the topic of Narcotics and intoxication come up?

The current investigation by NCB is constantly showing the linkage between the Bollywood stars and the drug mafias. The Sushant Singh Rajput Case has completely got a new turn and disclosed the ugly side of Bollywood. Until now, movies like Kabir Singh were made to falsely glorify alcohol and drug intake. However, now we know that drug intake is a part of these celebrities’ life. Thus, this reel and real pro narcotic behavior followed by the people, we look forward to is leaving a pessimistic impact on the youth.

Impact on the University’ crowd:

The 3 lakh students of the varsity are well aware of the situations going around. Drugs, alcohol, and cigarettes have been constantly termed as cool stuff in reel life. Now, even the favorite actors of these youngsters are displayed as drug consumers. Hence, all this is leaving a huge negative influence on them. Therefore, an awareness campaign is of vital importance. A survey says that around 75% of DU students are involved in the malice of taking drugs and several other intoxicants. You may often find the University students smoking cigarettes outside their campus and at near food joints. The varsity has been dealing with this problem for a long time.

Peer pressure, being trendy, and looking cool is what leads the students exposed to these malpractices. Once they start, there is no going back. However, they don’t realize the hazard being posed to their body and also about their families.