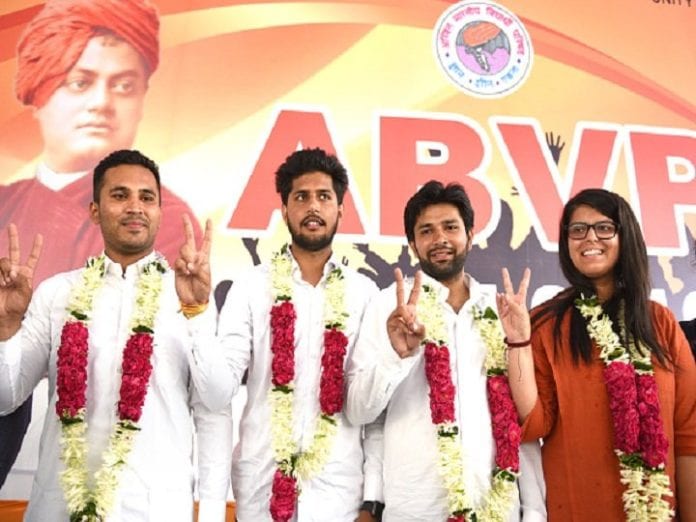 After a month full of campaigning, sloganeering, free pizza distribution and reckless paper wastage, the University of Delhi now has it’s new four membered Student’s Union. More than anyone else, the DUSU Result would be celebrated by the sweepers who had a hard time cleaning the piles of paper accumulated on the campus roads.

To not much surprise, the RSS supported incumbent ABVP registered a massive victory, clinching three out of four seats at grab. NSUI’s candidate Ashish Lamba was the only opposition candidate who put up a fight and won the post of General Secretary. AISA, which ran the most eco friendly campaign, failed to open their account this year too. Last year too the ABVP had won three posts and NSUI had won one. Counting was delayed by around two hours and started at 10:30 am as the candidates turned up late.

The voting for four positions ended amid allegations of EVM malfunctioning. Over 1.29 lakh students were eligible to cast their vote. A total of 144 EVMs were used for students’ union polls and 137 were used for college union polls. Polling began at 9.30 am in morning colleges and ended at 1 pm, while in evening colleges it started at 3 pm and ended by 7.30 pm.
The voting turnout was recorded at 39.90 per cent this year — over four percentage points down from the last year. Last year, the election saw a 44.46 per cent voter turnout.
Hot weather, holidays in colleges and disinterest of students in college politics were cited as reasons for the lower turnout. Thursday was a declared holiday for students, so many students did not turn up to cast their votes.

Sixteen candidates, including four women, were in the fray.  A total of 52 polling centres were set up and tight security prevailed throughout the campus.

Reaction to the DUSU results:

ABVP thanked their supporters after the victory through a celebratory post on Twitter.
“We have done it, yet again!
We thank the students of Delhi University for reaffirming their faith in our leadership & choosing #ABVP4DUSU”

The victory of ABVP was lauded by senior BJP leaders. Many of them took to Twitter to congratulate the winning candidates.

BJP leader Babul Supriyo showered the team with praise as he tweeted, “Heartiest Congratulations to the Young Guns You guys inspire us. More power to you”, to congratulate the ABVP contingent.

NSUI, which managed to win only one seat for the second year in a row took a dig at the only losing candidate from ABVP’s side.
“ABVP fielded Yogit Rathee who was college president of Ramjas College when the violence took place in 2017. The students have given a clear mandate against violence,” NSUI’s Akshay Lakra said after Ashish Lamba won on the post of Secretary. DUSU Result

ABVP had made sure that it replaced manifesto with the ‘vision document’, which was prepared after consultation with students of DU. In the vision document published by ABVP this year, it showcased a three-year plan called ‘Vision 2022’, similar to the BJP at the national level.
The issues that the student body focused on included building better infrastructure and improving ranking of DU by 2022, the year when DU will  celebrate its 100 years.

The results may be out, but the work of the union has just started. We, at DU updates, would encourage each of you to ask questions from your representatives and hold them accountable for their promises.