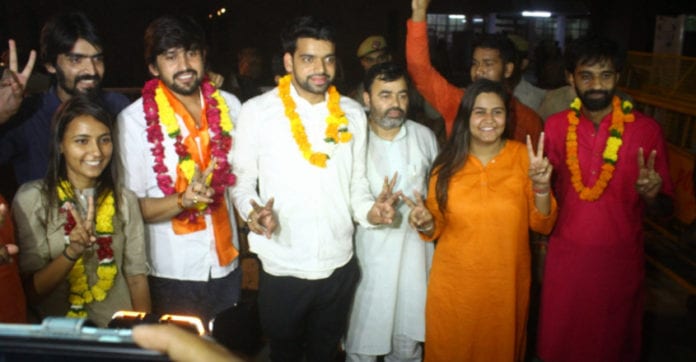 In the elections to the four central panel posts in the Delhi University Students Union (DUSU), the Akhil Bharatiya Vidyarthi Parishad (ABVP) bagged three posts on Thursday, while the National Students’ Union of India (NSUI) secured one.

From the ABVP, Ankiv Baisoya won the election to the DUSU president post with 20,457 votes, while Shakti Singh got the vice-president post 23,046 votes, and Jyoti Chaudhary became the joint secretary after securing 19,353 votes. Akash Choudhary of the NSUI won the polls for the post of secretary with 20,198 votes.

The counting for the DUSU polls was earlier suspended on Thursday afternoon due to a “fault in EVMs”. It was resumed in the evening, after a gap of about four hours.

“After elaborate discussions, it was decided that the counting will be resumed today (Thursday). All candidates have reached an agreement on this,” an election officer for DUSU polls told PTI.

After the counting was halted, the supporters of All India Students’ Association (AISA) and NSUI shouted slogans against the Delhi University administration and created a ruckus inside the counting center.

“The polls are being held at the behest of the central government. The EVMs were tampered with. We want fresh elections,” Rocky Tuseed of the NSUI said.

The NSUI alleged that one EVM showed the option for ballot number 10 (tenth candidate) when there were only eight candidates in the fray and one option for NOTA (None of the above).

In a statement, the NSUI said, “NSUI was winning the DUSU election after six rounds when the EVMs magically started malfunctioning. One EVM showed votes on secretary post on ballot number 10 when there are only eight candidates. EVM also showed zero votes for NSUI candidate. It is clear that any further counting on these EVMs has no credibility and we demand that our candidates are declared winners immediately.”

Thanking the students for “reposing their faith” in NSUI, the party said, “We promise that we will not allow the fascist RSS-BJP to subvert our democratic mandate.”

NSUI chief Fairoz Khan claimed that the counting process depicted “the pathetic picture of the violent murder of the democracy by ABVP”. Meanwhile, ABVP leader Shakti Singh told PTI, “Only one EVM was faulty and it can be repaired. We want the counting to be resumed. Since we were leading on all the seats, the other parties are demanding fresh elections.” The ABVP lashed out at those demanding re-election. It said that the NSUI and CYSS should not clutch onto the excuse of ‘tampered EVMs’. “If at all there are any genuine concerns, they should approach the authorities instead of causing havoc and halting the counting on all posts,” the ABVP said.

DUSU is the representative body of the Delhi University students from most colleges and faculties. Apart from DUSU, which is an umbrella council, each college has its own students’ union to which separate elections are held.

For years, the battle for DUSU has mainly been the contest between the NSUI and ABVP. After an unflattering debut in 2015, the Aam Aadmi Party’s Chhatra Yuva Sangharsh Samiti (CYSS) fought this year as an allied partner of leftist group AISA.

Amid heavy police presence and some last-minute wooing of voters, DUSU polls were held on Wednesday with a voter turnout of 44.46 percent. The polling took place at 52 centers in the colleges and there were as many as 23 candidates in the fray.