DU students protested: When Delhi University released its first merit list for admission, Kerala State Board students were taking most of the admissions among other state boards. Kerala students have reserved maximum seats in popular courses of leading colleges. After which, a professor of Kirori Mal College said that there is a conspiracy in this and used the word Marks Jihad.

Several DU students protested against the professor. Moreover, they demanded the suspension of the professor from the university. However, Professor Rakesh Kumar Pandey refused to apologize. further said that he has arguments that support his views.

Also, on Friday DU students protest outside Kirori Mal College here against the professor, who had alleged conspiracy behind the admission of a huge number of students belongs to the Kerala Board in Delhi University. Many students are upset after the statement of the professor.

WHAT IS MARKS JIHAD | WHY DELHI University PROFESSOR CALLED THE ADMISSION PROCESS AS INFILTRATE?

The statement had sparked controversy on social media and among others. Recently, Kerala Higher Education Minister R Bindu wrote a letter to the Union Education Minister. Moreover, in the letter, action has been demanded against Delhi University professor Rakesh Kumar Pandey. According to Marks the word jihad is communally sensitive and derogatory to a community.

Apart from Kerala’s plea against the professor, other students and teachers also criticized the remarks. Following this, the Students Federation of India (SFI) contended that several students were being denied admission by various colleges.

After which the university published the notice. Which states that the university vehemently denies all its allegations. Being a Delhi university gives equal importance to the academic marks of all the students. 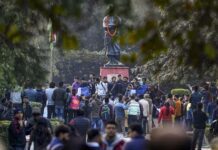