The University of Delhi is planning to establish a third campus in the eastern district of the national capital. The new campus in East Delhi will help reduce the administrative burden on both the North and South campuses in Delhi as well as create opportunities for higher education.

Talking with HT, DU pro-Vice-Chancellor PC Joshi, who is also the acting vice-chancellor announced they have land in east Delhi and they are also attempting to develop that into a campus, same as they have a North and a South campus. However, they want to have a campus in east Delhi also. The university’s high-powered council has formally examined the site and on Wednesday they are holding a meeting to discuss the same. They will then take the topic to other statutory bodies of the university for their approval.

The Varsity administration plans to establish law centers and departments for liberal arts courses on the new campus. Prof VC Joshi said that the project would cost around Rs 600 crore and hence the administration is making provision for funds.

The new grounds will be set up in the Surajmal Vihar zone of East Delhi. The land is situated close to the premises of Karkardooma locale courts and is available by both blue and red lines of the Delhi Metro.

Moreover, the new campus will not only provide more opportunities for higher education, it will also help in managing administrative tasks well. According to DU former Vice-Chancellor Deepak Pental, the third campus should be used for new courses or the School of Open Learning, SOL.

Meanwhile, Delhi CM Arvind Kejriwal called for action to improve inequality related to the high DU cut-off in October. Arvind Kejriwal had agreed to increase the number of colleges and universities in Delhi for the increasing number of students applying for admission in Delhi. 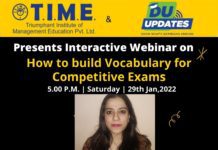