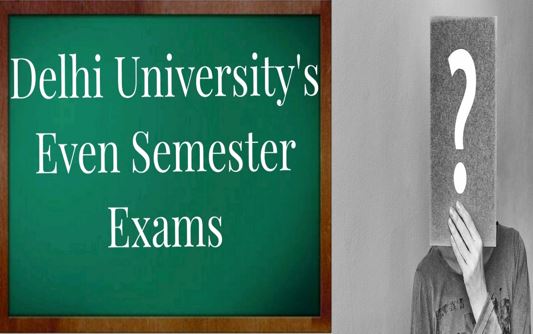 Even after extreme opposition from teachers and students throughout, the varsity decided to move on with the plan of conducting examinations in an open book mode.
Recently a survey was conducted by the Delhi University Teachers Association (DUTA), with the students of Delhi University to analyze the vicissitude of the situations due to COVID-19 and the availability of the internet and online study material with them.

The survey reports revealed that more than 85% have were not in favor of the open book exams that will be conducted in online mode.

Students who took admission in 2015-2017 and are pursuing their course in the choice based credit system (CBCS), they will have to take their exams from their homes only from July 1 to July 11.

The first exam will be the skill enhancement courses which are scheduled on July 1 for the final-year or sixth-semester students who are admitted to the choice based credit system over 2015-17.

Students of B.Sc. honors of Chemistry, Computer Science, Mathematics, Physics, and others who are in their final year/semester of their graduation will have to appear for their exams on the main discipline from July 1.

Exams for final year B.Sc. (Hons) students start from July 2 with Analytical Chemistry and end on July 16 with the final papers of Chemistry, Computer Science, and Electronics. The exams are expected to end on July 8- July 10.

Fourth-semester B.Sc. (Hons) students need to take their exams from July 2 to July 9.
For second semester students of B.Sc. (Hons) , all the exams will be held on July 10 and July 11.

Students of B.Com. honors, in their final year/semester, will have to appear from July 2 as per the schedule. Final-year BCom (Hons) will start on July 1 with International Business paper and end on July 12.

Students of BA Honours in English, Hindi, Political Science, Psychology, Sociology, and others, the exams in the core disciplines will have to appear from July 2.

Latest: DU EXAMS: WHOLE CRITERIA TO BE ADOPTED FOR THE CONDUCT OF OPEN BOOK EXAMINATIONS (OBE)