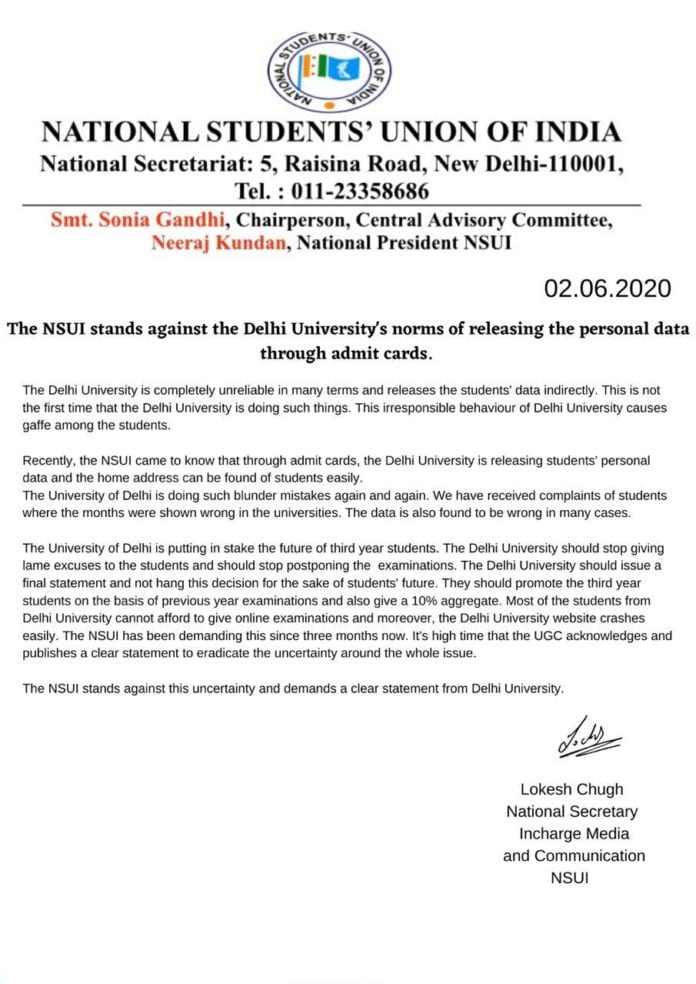 The NSUI (National Students’ Union of India) has released a statement against DU (Delhi University). The statement says that NSUI stands against the norms of DU of releasing personal data through admit cards.

In its statement, The NSUI has said that DU is completely unreliable in many terms. The organization has accused DU of releasing the personal data of students indirectly. The statement also mentions that this is not the first time that DU is doing such a thing.

The repeated irresponsible behavior of the University has embarrassed the students on several occasions.
This has come to the knowledge of NSUI, recently, that the Delhi University is releasing personal data of students. The home addresses of the students can be found very easily through the admit cards.

The NSUI has blamed DU for committing blunders time and again. The organization has received complaints from students who had received the wrong months from the universities. In several cases, the data has been found to be wrong.

In the statement released by NSUI, DU has been accused of putting the future of the students of the third year at stake. They have said that the University should stop providing lame excuses to the students. They should also stop the postponement of the exams. A final decision should be taken by the University of Delhi so that the students are not left hanging in the air.

The NSUI has also said that the students of the third year should be promoted based on the marks of the previous year. They should also be given a 10% aggregate. They have also mentioned that the website of Delhi University crashes easily. There are many students who cannot afford to sit for online exams.

All this has been demanded by the NSUI for the past three months. It is high time now that the UGC publishes a proper guideline for the Universities. This will eradicate the whole fiasco and uncertainty around this issue.
The NSUI is a student body whose Chairperson is Smt. Sonia Gandhi and National President is Neeraj Kundan.

The NSUI has been protesting the decision of DU to conduct online exams since its very inception. When the HRD Minister, Ramesh Pokhriyal Nishank asked the UGC to revisit its guidelines about the exams of terminal year/semester students, the NSUI deemed it as their victory.

But the very next day, the HRD Minister made it clear that the exams of final year students will be conducted. After this announcement, the NSUI resumed its protests for the cancellation of exams.

The exams of the final year students of Delhi University were supposed to begin from July 4. But the exams were postponed. Fresh dates have been issued by the University to conduct the online open-book examinations. Click here to check out the full date sheet.

COVID 19 THIRD WAVE MAY HIT IN NEXT 6 WEEKS : AIIMS DIRECTOR