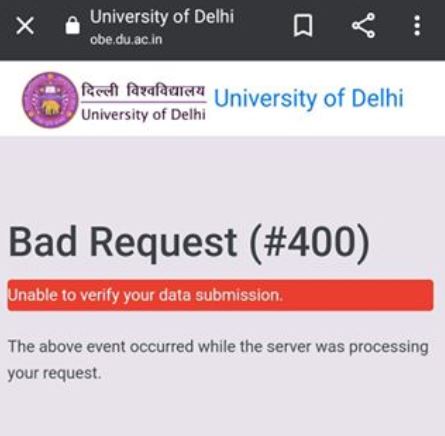 Delhi University today began its mock test in the much controversial and opposed pattern- “The OBE”.

First and foremost question: Is the DU administration taking even themselves any seriously? Leave alone the students, they don’t even bother to read student’s complaints, messages, e-mails, and tweets.

First Day of the MOCK TEST – MOCKED WELL, stood right up to the incompetency of the authority supposed to conduct the exams.
Despite repeated requests, concerns, e-mails, and even protests held by students and teachers collectively, Vice-Chancellor Tyagi, Dean (examinations) Mr. Vinya Gupta and the entire administration concerned with conducting examinations resorted to carrying on with their indifferent attitude and decided to turn a deaf ear to everyone.

The first day of mock tests turned out to be awful and a real disaster for students as well as for those who conducted these. (read VC)
Or maybe it won’t be wrong to say that it wasn’t a mock test in reality but just a portal testing exercise.

A professor took to twitter,
“Mock OBE, Day 1: Nonstop panic messages from students, duta email account is full (and so is email accounts of the Dean and VC).
student just reported: site has crashed!!
@DrRPNishank @ugc_india
You share the responsibility for the mess!
#DUagainstOnlineExams
#ScrapOBE””

There were innumerous complaints and glitches addressed to teachers’, DUTA mail, VC’S, and DEAN’S mail id’s as well with legit screenshots and proofs and still, Dean had the guts to utter the following statements.

Mr. Gupta in a statement to the media house said that ” When the exams are actually held, students will come to the portal in batches since the exam timings are different. During mocks the load is much more and yet the site hasn’t crashed which says something about the preparedness.”

Well, that is a such blunt lie on the face of media, teachers, and students as well. It was very evident that there were time slots for attempting the mock test as well and most of the students couldn’t even attempt the mock test due to lack of infrastructure hence the load will eventually increase on the day of actual final exams when most of them will be trying attempting.

The obe portal crashed in each and every time slot and in the final slot scheduled from 3:30 p.m. to 6:30 p.m. the students couldn’t even download the question papers, leave alone the argument of uploading the answer sheets
That unveils his another unplanned lie. 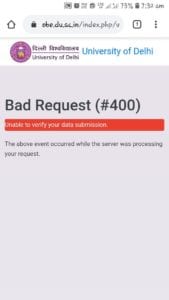 Even the guidelines published on the website for attempting the mock test were incomplete sentences making absurd sense, so instead that clearly depicts the preparedness Dean is referring to maybe.

THEY DIDN’T CARE TO PROOFREAD SUCH IMPORTANT INFORMATION.

Students asserted that they don’t make such callous errors even while designing forms for college society tasks.

There was no specific demarcation for different papers of different courses so eventually one has to download all the papers of the subjects relevant to his course and then match the UPC and paper name to get an idea about which needs to be attempted.

Students now need to upload answers for different questions separately in the designated question wise fields which undoubtedly will consume more of the time and the file size constraint is also there as the scanned documents of the answer sheets shouldn’t be larger than 5 MB.

Many students reported that they couldn’t find a single paper relevant to their subject and course in the list of 38 sample papers and those who found claimed that they got previous year question papers of either 2nd year or 1st-year subjects. 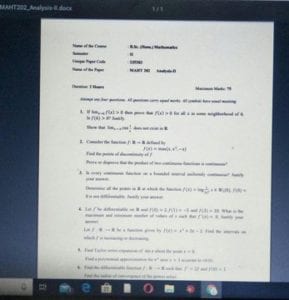 Are students supposed to be amused at this?

They didn’t even bother to give the correct previous year question papers for the final year students.

“How are we supposed to prepare now for OBE. We thought mock tests would be helpful and give us some idea about OBE. And now we are asked to upload random pdfs.
They are random question papers and none of them belong to our actual subjects. #DUAgainstOnlineExams
@ugc_india” ~ twitter user and a student of DU. 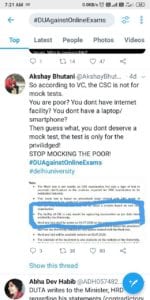 Also, the “CSC” facility DU is talking about is not available for attempting mock tests and those with lack of any device will have to directly appear on the day of examination and face all the challenges coming their way directly in the final examinations. And with this, these examinations become even more discriminatory and biased towards the underprivileged that they already were.

Students are even calling it a clear case of corruption!

“This is not a mock test, but a mockery of Delhi University.

Delhi University has made fun of themselves and has become a laughing stock in front of students. Official Statement suggests that the mock test is to make students aware of how to download questions and upload answers. But without any premeditated thought, DU is providing Hindi paper to Chemistry students and History paper to Political Science students. This ridiculous and reckless measures cannot be tolerated no matter what. Imposition of Open Book test is meaningless and this is not the way a mock test should be conducted.” – Lokesh cough, national secretary in charge, NSUI

Within the time span of a week or two, final year students have undergone various vicissitudes in the current OBE environment.

Firstly the Delhi University gave the mock test question papers via e-mail when they were supposed to take exams on a portal.

The UGC recommended cancellation of examination, and when there were speculations about the same DU disregarded the recommendation very conveniently.
Then it was announced that the exams will be conducted but have been postponed by 10 days.

Then it was announced that DU has extended its summer break till July 31 leaving the final students in dilemma once again. Later only we got to know that certainly the third year hasn’t been included and considered in this notice when the datasheet for mock tests and final exams was released. Datesheet and guidelines for the same were filled with typing errors which cannot be overlooked.

Then mock tests were Uploaded for few selected subjects only that too the entire mock test activity had many glitches and the portal crashed on the very first day in no time.

If this isn’t extensive mental bullying of students that to openly and officially then I don’t know what is!

Are the final year students not surviving in a pandemic? Seems like that only!

Isn’t this the same top-notch university in India, that same DU for which students toil day in and day out in their board exams to get into. Just a thought!