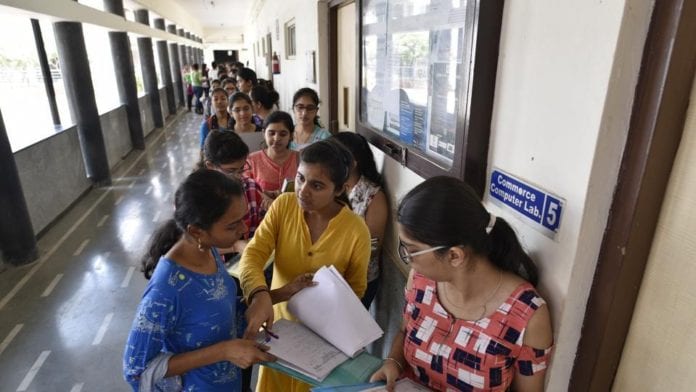 As the varsity completed the first cut-off process for merit-based admissions to undergraduate courses for the academic year 2018-19 on Thursday, many popular courses will not be available at colleges of your choice in the second list. The university has now announced a total of five cut-off lists.

According to an official, over 15,000 applications were approved by colleges affiliated to the university within three days, compared to just 2,200 students last year. The University has a total of 56,000 seats.

Students seeking admission to undergraduate courses on June 19 heaved a sigh of relief as they could smoothly complete their formalities, a day after facing difficulties due to a technical fault.

On June 18, which was the day one of the admissions, the DU’s server came under severe pressure as the DigiLocker, a government-owned public cloud storage where certificates and documents were stored, was not integrated with the varsity portal.

Students seeking admission in Delhi University say they faced problems due to slow connectivity while accessing the institute’s website on Monday (June 18).

“The admission portal crashed several times and the website took ages to get loaded. I was finally able to download the application form and got a printout ten minutes before the deadline,” said Aashi, a student who has applied for History honours at Indraprastha College for Women.

The overall minimum required marks for admissions this year are lower than that of last year.

According to an official from the university, 278,544 applicants have made payments.

The maximum number of applicants are from the National Capital, at 138,460, according to the varsity’s admission data.

The second cut-off lists can be accessed on the official websites of respective colleges on June 25.