Recently, a 12-year-old girl was allegedly sexually assaulted by a 33-year-old man in West Delhi. Not even a month passed when a girl was raped in COVID  care center, a now another victim. No wonder why Delhi is regarded as the “Crime Capital of India”.

Due to several serious injuries, the minor is in serious condition.  She has been admitted to All India Institute of Medical Science (AIIMS)

As the minor’s parents were daily wage earners, they went for their work. She was alone at home at Peera Garhi area of Paschim Vihar. Seeing this, the man assaulted the girl. The neighbors found her in a pool of blood and informed her parents. The brutal incident took place on 4th August evening.

Citing sources in the victim’s family, the report reveals the height of brutality. The girl has serious injuries in her private parts and intestine. Not only this, but she also suffered a fracture in her hips and head. Moreover, the rapist stabbed her multiple times with scissors. She has violent bite marks all over her body. The scratch marks on the assaulter’s body are proof that the minor fought courageously until she fell unconscious.

Adding further,  she said Delhi police were asked to appear before the commission by August 8 and submit a report.

The accused, aged 33, is a dweller of Mongolpuri and works in a factory. Also, he has a case of murder registered against him dating back to 2006 and his involvement is suspected in numerous cases of theft. The accused is wanted in as many as four other criminal cases. Police officials familiar with the investigation said that the child saw the accused committing robbery which is why he sexually assaulted her before aiming to murder the 12-year-old.

The present condition of the victim

According to a doctor in AIIMS, the minor is stable now as the two days of treatment and operation has passed.

However, chairperson of Delhi Commission for Women (DCW) Swati Maliwal, who visited the hospital and interacted with the doctors, said the situation of the girl is “quite serious”.

She has undergone severe injuries but her condition is stable now. She was operated upon late on Tuesday night. She is in the ward and on oxygen support, the doctor asserted. However, the next 48 hours are very crucial for the minor. 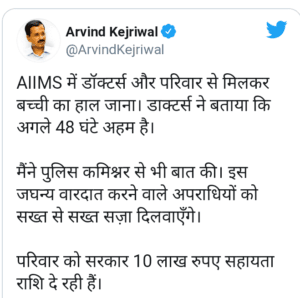 On Thursday (August 6), Delhi Pradesh Congress Committee held a protest in front of All India Institute of Medical Sciences (AIIMS). People stage a protest demanding justice for a 12-year-old girl who was allegedly raped and brutally attacked on Tuesday evening.

The Delhi government will hire the best lawyers for the case and ensure that the accused get the stringent punishment.

The vicious rape of a 12-yr-old child is absolutely horrific! Those animals rate nothing less than death. All of us are pleading for her and I urge @DelhiPolice to bring the perpetrators to justice at the firstest, he tweeted.