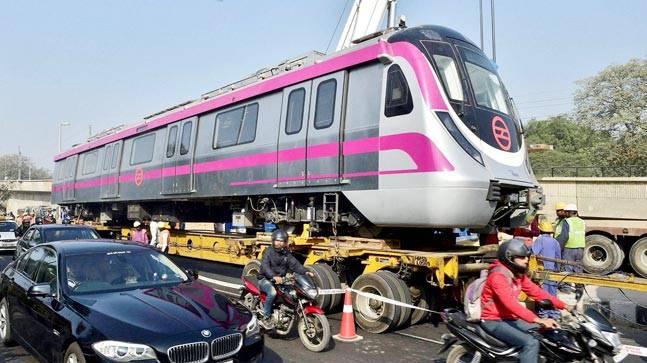 The second stretch of the Delhi Metro Rail Corporation’s Pink Line connecting popular shopping centres such as Sarojini Nagar, INA, South Extension and Lajpat Nagar, is expected to open by next month,as said by  DMRC sources .

The entire 59 km stretch is likely to be thrown open to the public by end of the year, they say.

As many as 21.56 km are already functional and the next 8.1 km is expected to be thrown open by next month. That will make it around 29 km by August which will leave another 30 km to be opened by the end of the year.

The 8.1 km stretch from South Campus station to Lajpat Nagar station is expected to be opened in the next 15 days. Inspection of the stretch by the Commissioner for Metro Rail Safety (CMRS) is slated for July 24,Tuesday, they said, adding post the inspection, the stretch is likely to be inaugurated early next month.

The Lajpat Nagar to Mayur Vihar stretch (15 km) is likely to be opened in the next two months. Trials are currently on, sources say.

The 59-km Pink Line is Delhi Metro’s longest corridor and runs from Majlis Park in the north to Shiv Vihar in north-east. The first corridor of the Pink Line, from Majlis Park to South Campus was opened on March 14, connecting north and south campuses of the Delhi University on the DMRC network for the first time.

After the opening of the Majlis Park to Lajpat Nagar section, the total length of DMRC’s network will be 296 kilometers.

Top 10 Best Districts in the State of Bihar