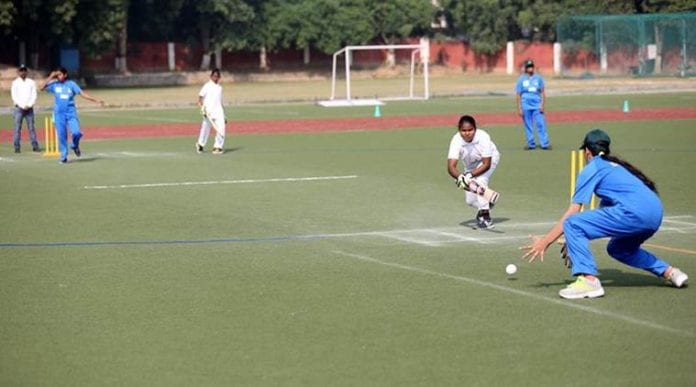 Under the November sun, 27 young women participated in what the Cricket Association for the Blind in India (CABI) calls the country’s first inter-state women’s blind cricket tournament.

The tournament — a two-day bilateral three-match series between Delhi and Jharkhand organised by the Cricket Association for the Blind, Delhi (CABD) — is being held at Modern School, Vasant Vihar. Two 12-over matches were played on Saturday. Delhi won both — the first by 53 runs and the second by eight wickets.

Delhi’s 16-member team is almost entirely made up of students from various Delhi University colleges. Yogesh Taneja, president of the CABI, said this is because selections were made after a friendly tournament was conducted at Dyal Singh College earlier this year. “Our reach was limited and we had to start somewhere. With time, we hope to incorporate girls from other universities,” he said.

Ayushi Sharma (20), a second-year history student from Miranda House, said, “I’ve been playing blind cricket since I was in school, but this is the first time I’m playing at this kind of a platform. We’ve been practising on and off since June. Since we study in different colleges, we don’t have time and practise during the weekend. During the last week, we practised every day.”

The Jharkhand team entirely comprises of students from St Michael’s School for the Blind, Ranchi with an average team age of 14. Golu Kumar (18), the team’s manager and coach as a member of the state’s blind cricket men’s team, said the team was formed a little over two weeks ago when they were invited by CABI. Given the limited time, the team has exactly 11 players with no substitutes.

“A lot of these girls have never left the state, so it took a fair amount of persuasion to convince their parents to let them travel to Delhi. Next time should be easier,” said Neeta Khalkho, a teacher who accompanied the girls from the school.

Fourteen-year-olds Roshni Kumari and Jigita Mahto said they aren’t nervous about the tournament: “Our team’s performance will obviously be the best.”

Anju (22) from the Delhi team said the tournament also gave them an opportunity to identify problem areas. “We have to work quite a bit on our fielding. We don’t have a proper pitch to practise on, and play in a small park in Kingsway Camp, so we couldn’t really practise our fielding and throwing,” she said.

“The plan is to carry this forward. Apart from these two teams, the Cricket Associations for the Blind in Maharashtra, Odisha and Karnataka have also formed state women’s teams. A national tournament is being planned for February. The problem of lack of recognition and infrastructure that blind cricket faces is more severe in the case of women, and we hope to encourage others to take this forward,” said Taneja.