On Monday, the Delhi High Court (HC) decided to hear on July 9 a plea relating to the calculation of marks of Class 10 candidates of CBSE affiliated schools. The hearing in the issue was fixed for 28 August, but the NGO had started an application for a quick hearing. On this, a division bench of Chief Justice Jyoti Singh and Justice of High Court Justice DN Patel has fixed it for an early hearing on July 9.

The petition on behalf of the NGO put forward a serious problem of using the historical background as the important factor in the marking scheme of CBSE Class 10 candidates. Advocate Khagesh Jha told the court that the marks will depend on how the superiors have performed. The NGO also announced that once the procedure of uploading students’ marks and result preparation is over, the petition will become of no use.

Along with this, on July 9, the Delhi HC will also hear a request filed by NISA Education, a registered society of private schools. The petition is respecting the arrangement of a results committee for the evaluation of class 10 candidates of CBSE.

The Society had put up concerns that since the results committee members and other staff and faculty of the school would be compelled to be physically present for the considerations, there could be an actual health danger due to the Coronavirus pandemic. The society’s counsel Ravi Prakash Gupta contended that if the petition is not heard before the proclamation of the result, it will come to be meaningless.

CBSE’s counsel Rupesh Kumar told the court that there was nothing left in the society’s plea as most of the schools have already uploaded the marks of their students. Kumar said, his case is because of the lockdown, the resulting committee cannot be constituted. There are 21,000 schools and out of I, only 62 school marks are remaining to upload marks. The petition is meaningless.

Earlier, on June 02, the Delhi HC had sought response from the Centre, Delhi government, and CBSE on a plea by the NGO, which claimed that the board’s policy for analysis of marks of class 10th candidates based on the IA by schools was unconstitutional and necessary to be revised.

DELHI HC REFUSED TO INTERVENE WITH FACULTY OF LAW EXAMS 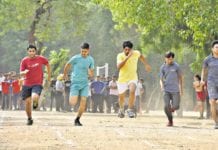