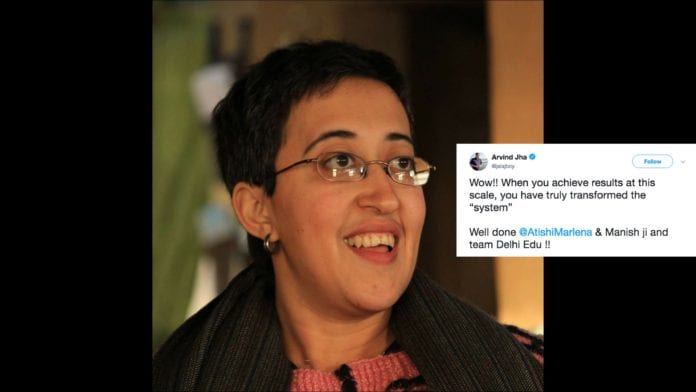 With government schools in Delhi having performed better than the private ones  in the CBSE class XII examinations 2018, Aam Aadmi Party (AAP) leader Atishi  Marlena, who was formerly an advisor to the deputy chief minister Manish Sisodia before her appointment was cancelled by the Centre, took to Twitter to hail this “fantastic performance”.

“Fantastic performance by Delhi govt schools in Class 12; the 90.64% result is 2.37% better than our own performance last year, and 7.6% higher than national CBSE average! Who would have thought this was possible?” Atishi Marlena, 26th May,2018 via twitter.

In terms of the pass percentage, the government schools this year have recorded a increase of 2.37 percent over 2017, to stand at 90.64 percent, reported The Times of India whereas Delhi’s private schools recorded a pass percentage of 88.35% this year.

Many responded to Marlena’s tweet with congratulatory messages, lauding the efforts of the Delhi government — led by CM Arvind Kejriwal and Manish Sisodia  to achieve this result.

Siddhartha Basu on twitter wrote “Outstanding ! Congratulations to each one of the students, and kudos to all those behind the revolution in Delhi government schooling which has made such continuous improvement possible, with such brilliant results.”

“Say what you may, you can’t take anything away from AAP government’s work towards education in Delhi. Big props to @ArvindKejriwal and @msisodia, really.” Abhishek Baxi

“Achieved against all odds. Defying the harassment at the hands of Modi govt & it’s agents in Delhi. On completion of four years, can the BJP cite one such concrete achievement either by its central govt or by any BJP ruled state governments.” Nagendar sharma

“This after every effort was made to delegitimise, disrupt and trouble the Delhi government. Well done! The results of dogged hard work are showing.” By Rituparna Chatterjee on twitter.

“Congratulations to @ArvindKejriwal ji and @msisodia ji for transforming Delhi govt schools. Hope to learn from your success and emulate in Jharkhand soon.” Hemant Soren

And some also made it a point to highlight the good work of Marlena while she served as Sisodia’s advisor.

“Delhi govt School’s result is 90.64% which is 2.37% higher than last year which was 88.27%. Congratulations Students,Teachers, parents and @ArvindKejriwal @msisodia and @AtishiMarlena Your hard work succeeded, Keep up the good work.#DelhiEducationRevolution” Amit Mishra exclaimed.

“You all deserve a lot of credit for this. Faced with huge obstacles, you guys have marched on! Quality and affordable education is a right of every citizen, and you guys are making it happen. Kudos!!” SnehanshuMitra (Sammyboy)

“Wow!! When you achieve results at this scale, you have truly transformed the âsystemâ
Well done @AtishiMarlena & Manish ji and team Delhi Edu !!” Arvind Jha

Earlier, Marlena’s appointment was cancelled along with eight other ministerial advisors after the Union Home Ministry said that the Centre had not approved the creation of any such posts. At the time, Sisodia, while expressing his anger against the order, had underlined Marlena’s contribution to the education system in the national capital, saying, “The target for this order is Atishi Marlena. It’s because she is key to improving the education system in the city. This is a conspiracy to derail Delhi’s education revolution.”

Who Benefitted When You Removed Marlena?’: CM Kejriwal

With the improved results in government schools, Kejriwal also made a question as to why Marlena was removed. His tweet came in response to Lieutenant Governor Anil Baijal’s post on Twitter, where the latter congratulated the Class XII students, their parents and teachers for the “outstanding performance” in the CBSE examinations.