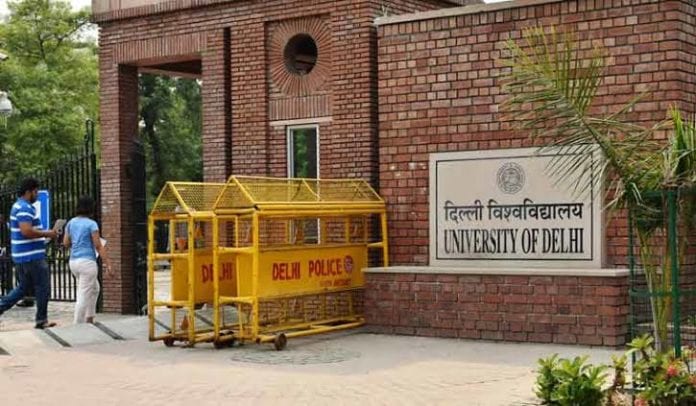 The Government of Delhi ordered a special audit in six colleges. Those six colleges include Deen Dayal Upadhyaya College, Maharishi Valmiki BEd College, Bhagini Nivedita College, Keshav Mahavidyalaya, Shaheed Sukhdev College of Business Studies, and Aditi Mahavidyalaya. The funded colleges said that they were unable to pay salaries to staff members for three months due to the non-release of funds.

The government of Delhi passed an order that states due to ongoing special audit and non-release of Grant-in-Aid, DU teachers, and other staff members of those colleges that are funded by the Delhi Government did not receive their fees for three months.

The Chief Minister of Delhi, Arvind Kejriwal passed an order. He ordered to immediately pay the outstanding salaries to the teaching and non-teaching staff from SSF.

DELHI GOVERNMENT PERMITTED THE COLLEGES TO USE SSF

Delhi Government permitted the colleges to utilize the Students Society Fund for the payment of salaries to the teaching and non-teaching staff. It further states that if after full utilization of the Students Society Fund, salaries remain unpaid, the Directorate of Higher Education will pay the remaining amount. Colleges have to request them formally for the payment of pending salaries.

DU COLLEGE HAVE TO PAY SALARIES WITHIN TWO WEEKS

DU colleges have to strictly follow the orders issued within two weeks so that even if a special audit is going on, DU teachers will receive their salaries. Professor Balaram Pani is the Dean of Colleges. He said that the DU colleges reserved the Students Society Fund for the activities of students and under no circumstances, they can use it to pay salaries to staff members.

SSF IS UTILIZED FOR STUDENTS ACTIVITIES

Delhi University Teachers’ Association, DUTA said that it is not acceptable to pay the outstanding salaries to the teaching and non-teaching staff from the Students Society Fund. Students pay these funds to organize extracurricular activities. That is why it can be used for students. By doing this, the Delhi Government is pushing the burden of salary on parents and students. Even as an interim measure, this is unacceptable.

For any problem in the past, colleges used to utilize this fund. They always returned the money to the head after grants-in-aid were released. DU colleges cannot use this SSF permanently.

THE MEASURE IS UNACCEPTABLE AS PER DUTA

DUTA said that the Government carried out the audits regularly for any institution and teachers always received their salaries. So what is different this time? This measure is neither justifiable nor sustainable. It further said that this situation makes them angry that DU teachers of six colleges funded by the Delhi Government did not receive their salaries from the past six months.

The Government of Delhi said that the lawyer representing DU College said that it has paid salaries from the Students Society Fund in the past also.

DU COLLEGES CAN USE SSF

The judge asked him whether the administration allowed to pay salaries from SSF. He nodded and said that just need official permission from the Directorate of Higher Education. They can be asked at any time to present their documents stating that it is illegal. However, they can do this as they have not presented such documents to the auditors or the court.

They claim that it is illegal because this fund is discretionary with the principals. Moreover, they are using it in a corrupt manner.