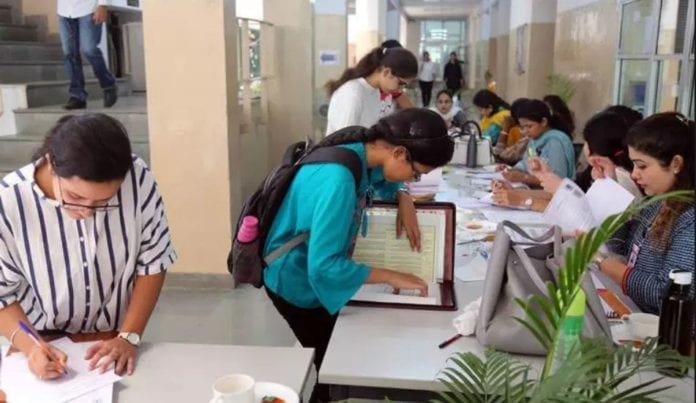 Many students and their parents from Andhra Pradesh are running from pillar to post in the national capital fighting an injustice heaped on them in the conversion of their CGPA to percentage in admissions to Delhi University this year. The problem is arising due to two reasons. One of it is due to the disadvantage in conversion of their CGPAs into percentage with respect to admission to undergraduate courses in Delhi University for 2019-20.

The AP Intermediate Board have clearly mentioned that for calculating the Percentage of marks, Cumulative Grade Point Average (CGPA) will be multiplied by 10. However, Delhi University officials have been maintaining that they have not received any information regarding the conversion factor of CGPA to percentage from the Board of Intermediate Education of Andhra Pradesh.


Therefore, the DU is considering the conversion of grade points by multiplying it with 9.5 instead of 10 as is done for the CBSE students here. This is the second problem. The AP students who have thronged the capital with parents for admissions into the prestigious colleges of Delhi are now at a disadvantage and are unable to secure the very high cut-offs of the DU.

For example, the cut-off for political science students seeking admission into the Hindu College of the DU is pegged at 99 percent this year. Almost similar is the case with other colleges. The two-fold problem begins with the refusal of the Intermediate Board of AP that has refused to award 10 CGPA to all those students who deserve it. This has now imposed the hardship on them. The CBSE GPA system is not similar to that of most of other institutions and boards. Starting from 0, for every 10 marks, you get a point. So, here’s the breakdown. (0–9 = 1 point, 10–19 = 2 points, 20–29 = 3 points, 30–39 = 4 points, 40–49 = 5 points, 50–59 = 6 points, 60–69 = 7 points, 70–79 = 8 points, 80–89 = 9 points and 90 and above including 100 = 10 points) From the above, it can be deduced that a student who has scored 90 marks in each subject, will actually score 90% but getting a perfect 10 in each, he/she would be a 10 pointer. At the same time, if a student who scores 100 in 4 subjects and 89 in the fifth, his/her effective CGPA will be (10+10+10+10+9)/5 = 9.8, whereas, percentage wise, this student would have scored 97.8% { (489/500) X 100}, which is way beyond the 90% of the aforementioned 10 pointer. Whether the AP Board officials deliberately did it or out of sheer negligence, it is the students from the State who are now facing the problem here. If the DU admissions go strictly by their rule, there is little chance of any of them securing admission in any of the colleges. The students and parents have approached the Principle Resident Commissioner of Andhra Bhawan here and he has promised to look into the matter. He had already written to the Secretary (Higher Education), Ministry of Human Resource Development. He had also assured the students that even legal options would be explored. But the time is running out as the deadline for the first round of admissions is just four days away. Unless the courts intervene here the process goes on and AP students would lose out in the race.