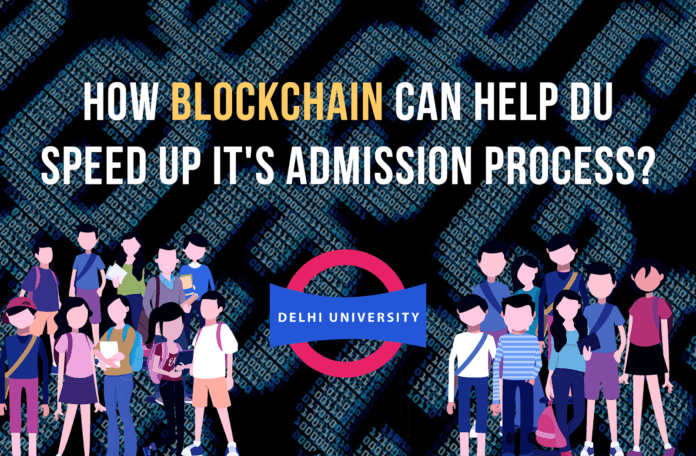 BLOCKCHAIN creating alternatives for admission procedure: Every year many students aspire to get admission to Delhi University. In the year 2019 alone, a staggering total of 2,58,388 applications were received for 64,000 undergraduate seats available at the varsity.

The process isn’t comfortable at all for the students. They have to first sit through their class 12th board exams, wait for 2 months to get their results announced, and then another 2 months to finally get into the college. But to get to your preferred college you need to follow the admission process.

DU ADMISSION 2020: ADMISSION PROCESS WILL NOT BE SAME

Admission forms are to be filled as soon as the board results are announced. After a month of waiting for the cutoffs are declared and the real struggle starts. You might say aren’t the board exams alone a tussle for the students, yes I agree, but you see the authorities just don’t want it to end there. They want students to be lined up at the colleges which they applied for, in the scorching heat of July, uncertainty in their heads and hands full of documents.

In this dream of digital India, we are still entangled in the age-old process of document verification. But who cares? Applicants have to bring their original documents to the college for forensic verification. This process as you all know is very slow. COVID-19 pandemic has already put our lives to a halt. Thus, the process is getting delayed, increasing the problems for the students.

So how can the varsity speed up this process that takes weeks right now to just a matter of seconds? Using the technology of course! Blockchain to be precise.

Blockchain is an immutable public ledger that keeps transactions & records, distributed & decentralized while ensuring security & zero control of any particular organization over the data.

Think of it like this. There’s a topper in the class whom everyone envies. After every exam, each student in the class rushes to the teacher and asks for his score in the test. They validate the score rechecking his answer sheet and record it in their respective notebooks.

So what is the problem with that?  Imagine that Mr. Topper has some special connection with this teacher and he scored a bit low this time. After a month of the test, he asks his teacher to increase the score which not surprisingly she agrees to. This makes the database MUTABLE. Now if it was to be done in a decentralized system Mr. Topper would have to ask each of his classmates to change the score which they would not be willing to do. He would have to convince more than 50% of the class to record that change, which is quite impossible.

Bloody competition! So by maintaining a decentralized system, you have just managed to break the streak of Mr. Topper. Also, congrats you have just understood the basic concept behind blockchain. Now let’s see how this technology can help ease the admission process, our real concern!

When you go to college with your documents for admission, the college doesn’t trust you. They are not sure if the documents you are producing to them are original or forged. They need to verify them before they can conclude that the documents are indeed original. How do they do that? By forensic checking, I know it sounds ancient! They also cross-check with the centralized database managed by the Education Boards like CBSE.

But as you know they are prone to attack and can be easily altered.

Imagine if one could complete the verification process in seconds! That would be magical, isn’t it?

Blockchain enables you to establish trust with the third party in seconds which takes days right now. And we all know how much time, cost, and effort both the students and colleges can save if they use this technology.

But blockchain is just a decentralized database, how can it help verify the documents of the students? See, initially, the internet too was perceived as just a network of computers, and then who would have thought it would be used to ask Alexa if she loves me, in 2020?

Coming back to the verification of certificates. Certificates are basically an issue of a statement from one party to another that a certain set of facts is true. They contain a signature that can only be affixed by an issuer so that the receiver is assured that the stated facts are true.

A blockchain can keep a list of issuer and receiver of each certificate, together with the document signature (hash) in a public database (the blockchain) which is identically stored on thousands of computers around the world.

Document signature or hash is the way to keep your data secure over the blockchain. Since the data on the blockchain can be accessed by anyone you wouldn’t want to put your personal information there. See the students in the class we talked about previously recorded the marks of Mr. Topper in their notebooks.

What if they want to record his birthdate too so that Mr. Topper can’t get away with his homework more than once a year? Quite simple! They approach the teacher and ask for his birthdate. But the teacher isn’t sure if she should provide Mr. Topper’s personal information to the class.

She instead gives you a secret code to record on your notebooks which is unique and can only be derived from that particular birthdate. She also tells you the steps or algorithms to derive the code for any data. But the catch is you can’t trace back the original data from the code.

It’s a one-way function that gives unique code to each set of data, even the slightest change in the data would change the code drastically. How does this help? The teacher told the students that they can check if the claim of Mr. Topper is true by running that particular algorithm on the birthdate he claims and matching it with the code she gave. If the code matches, Mr. Topper indeed has a birthday on that day; if it doesn’t you can enjoy Mr. Topper getting his share of punishment for not getting his homework done.

You may also consider data here as the raw egg, algorithm as boiling, and the code as a boiled egg. When the raw egg is boiled, you get the boiled egg. But you can’t get back the raw egg by doing anything with the boiled ones. To verify that it was indeed a raw egg before boiling, you take a similar raw egg and boil it. If the two boiled eggs are the same you can conclude the verification.

If it is such a breakthrough in technology why haven’t we implemented it yet?

Implementation of this technology requires every stakeholder to move to this technology. We need the issuing organization to issue certificates and mark sheets over the blockchain.

We would require to bring them on board to issue certificates over blockchain so as to make this process efficient. It is like early-stage internet, everyone knows that email is a great way to communicate and a breakthrough in technology but it’s effective only if everyone in the ecosystem is on the internet. Thus to implement blockchain we need serious efforts from the government to bring all the authorities to use this technology.