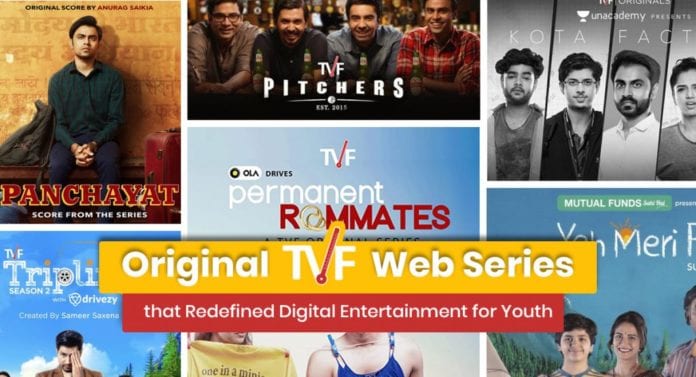 Here are the 7 best TVF series to watch, just in case you missed any. The Viral Fever abbreviated to TVF is one of the topmost Indian digital entertainment channels. It has always been in the limelight with its youth-centric series reaching out to the younger generations. Permanent Roommates, Pitchers, and more have broke records in their fields. Also, Aspirants is the new TVF series that is stealing everyone’s attention.

The series Pitchers revolve around the startup culture of India. It focuses on realism, giving an insight into today’s youth life cutting short on overdramatic sequences or emotional agendas. So, the theme of the story revolves around four individuals fed up with their mundane 9 to 5 jobs. The series continues to how the individuals aspired to become entrepreneurs and create sensation all around the globe. They quit their jobs and embraced all the unwelcomed challenges simply for their startup. Pitchers mirrors the struggles of a person from an IT background, and those willing to initiate a startup. Hence, a lot of life lessons can be extracted from this series.

So, the series proves to be relatable for everyone at some point. Also, it has well-written dialogues that are properly executed. The entire series is inundated with soulful and lively music, surreal viewer experience, and elegant cinematography. Hence, it is a must-watch TVF series.

Permanent Roommates is a romantic comedy incorporating engaging drama. Hence, it is simple yet amazing imbibing humor, sarcasm, and situational comedy. The story is about a couple who were in a long-distance relationship for three years only to land up in awkwardness and confusion after they meet. Hence, it continues as they move in together to figure out the differences between their virtual life and real life. Thus, the story is an excellent interpretation of modern-day couples.

This TVF series is a perfect blend of pure feelings, compatibility, families, responsibilities, and more. Hence, it is a relatable slice of life. Also, Permanent Roommates is one of the two Indian web dramas making it into the top list of entertainment.

This TVF series has some amazing soundtracks along with brilliant background scores. So, it includes the perfect amount of drama and relevance through a road-tripping saga. The story is all about a sibling’s road trip portrayed brilliantly. Thus, together they start an amazing and hilarious journey only to find the importance of themselves and their relations. So, it gives life lessons on the importance of a family that remains through thick and thin.

In its season 2, the sibling trio makes a comeback with another fascinating road trip. The soundtrack and cinematography are even better than the previous season making it a complete hit. Hence, the story is yet another unambiguous Indian tourism also showing the spoof on family bond.

TVF series Immature revisits the headiness of first love and the small rebellions of adolescence. So, it is a glimpse of school life, with great friendship. It begins with a well-known story, our fantasies that are rejected by  parents. Then it goes on to a normal occurrence giving an insight into teenage lives. The romantic comedy shows the male character going gaga over his crush, making cute little efforts for her. The chemistry shown is amazing, with a great plot.

The series also has some twists and turns. Hence, it is full of fun yet breezy and refreshing with a happy ending. Also, it takes a person into nostalgia dealing with the first bike, the first crush, and more firsts. Thus, it is a treat that takes a person back to school.  The soundtracks are well matched to the storyline, make the series more engaging and heartfelt. Also, the ensemble did an excellent job with their acting and dialogue delivery.

This TVF series connects a person on the most simplistic levels leaving a profound impact. Hence, it is a slice of life-giving a guaranteed nostalgia ride into the 90s and 80s. The cinematography is commendable from 90s costumes to conversations on cordless phones, super Mario games, phantom cigarettes, and more.

The show revisits the growing years of a 13-year-old boy over one summer holiday. Also, the constant conflict between the old and new inter-generational dynamic of that era is portrayed. Hence, the show is a boon for every 90s kid that definitely makes it a hit.

Kora Factory did dare to highlight the life struggles of orthodox Indian students rather than sugarcoating them. So, it involves the students, who form the majority, who are mediocre and tend to get a 9 to 5 job in the future. The story is set in the city of Kota, presumed to be the hub of aspiring students. Hence, the students here are IIT aspirants who are busy adapting to a new town, parent-less hostels, sweaty nights, coaching class hierarchies, and more. However, apart from portraying the struggles of a student that tries to meet the expectations of society, friendship is also emphasized upon.

It has an amazing storyline with great characters and brilliant dialogues. Most of the scenes are 70 – 80 percent true. Also, the story gives life lessons of friendship and a motivation to work hard amidst the cut-throat competition. Thus, it is a must-watch for students.

This series depicts the dilemma of a UPSC aspirant from the viewpoint of an aspirant from Delhi’s Old Rajinder Nagar, the UPSC hub. It has a similar feel to Kota Factory, but it is more serious and mature. The difficulties of an aspirant are depicted without impacting their mental state of readiness. Rather, it inspires and motivates everyone watching. 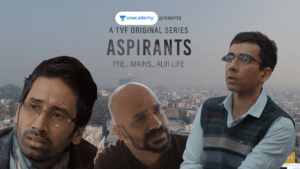 All three main actors, along with Sandeep Bhaiya, have become internet sensations in such a short time. They are flawless in their performance and delivery of dialogue. Guri is everyone’s favorite, but the character of SK would be more relatable to the general public. His little monologue at the beginning of episode 1 well informs the harsh truth behind the stressful hours of planning. The toils of a person both mental and physical are depicted well. Thus, this TVF series stays grounded, is true to facts, and lacks unnecessary characterization. It has amazing dialogues, that can stir a person’s heart.