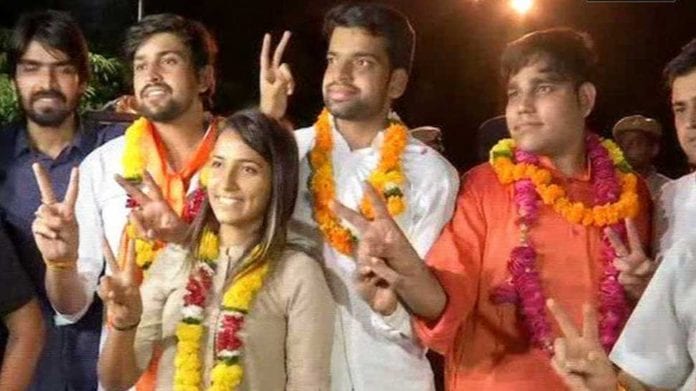 Delhi University’s (DU) department of Buddhist Studies has received about a dozen complaints against students taking admission using ‘fake certificates’ this year. This emerged days after the complaint against the newly elected Students Union President  Ankiv Basoya did the rounds, university officials said.

The Congress-affiliated National Students’ Union of India (NSUI) had accused Basoya , a member of the RSS-backed Akhil Bharatiya Vidyarthi Parishad (ABVP), of allegedly submitting fake documents to get admission in the Masters in Buddhist Studies programme.

The NSUI had submitted a complaint against him with the varsity’s grievance redressal committee, which was later forwarded to the Buddhism department for an inquiry.

KT Sarao, head of the department of Buddhist Studies, said the department had conducted a meeting with the admission committee on Monday and found that a dozen complaints of similar nature were received against other students.

“Besides Basoya’s case, we have received a dozen of complaints of the same nature against students studying in different courses at the department. We have decided to get all certificates verified as per the procedure in place at DU before transferring the matter to the police,” he said.

Explaining the procedure, Sarao said the university gets students’ certificates verified from the last educational institution they were enrolled in.

“In case any certificate is found to be a fake, we report it to police as it is a criminal offence. After the police verify it and find that the degree/ certificate is fake, they register an FIR against the person,” he said.

The NSUI, however, alleged that the department is “deliberately delaying” the process to waste time so that fresh elections are not conducted for the president’s post.

“As per the norms, if the cancellation of his candidature does not happen within two months, the vice president will be promoted to his position. They are simply helping the ABVP keep that post,” NSUI national in-charge Ruchi Gupta said.

As per the Lyngdoh Committee guidelines, based on which student union elections are conducted in educational institutions, re-elections can be conducted only if the post of an officer bearer falls vacant within two months of polls. Otherwise, the vice president is promoted to the post of president and joint secretary to the post of secretary.

The NSUI had last week circulated what they claimed was Basoya’s Bachelor’s degree along with a letter from the Tamil Nadu-based Thiruvalluvar University, claiming that Basoya’s degree was fake.

V Peruvalluthi, registrar of Thiruvalluvar University, confirmed that the certificate sent by the NSUI for verification was fake. Meanhile, Basoya and the ABVP, denied the allegations and termed them as NSUI’s “propaganda” against them after losing the Delhi Union student union polls. The ABVP had bagged three out of four seats in the DU students’ union elections –