A Survey By Student’s Group, Nearly 41.2 % of Delhi University students’ have not attended online classes at all

From a survey by a student’s group, it is found that as many as 41.2% of students of Delhi University (DU) have not been able to give attention to online classes at all amid the nationwide lockdown.

The survey circulated by the Delhi University unit of All India Students Association (AISA) covered more than 1500 students and was conducted over the last two weeks. However, the survey concludes that the main reason behind students not being able to attend classes online regularly was “poor internet connectivity”.

Due to the Coronavirus outbreak and the lockdown announced by the government, Delhi University had started online classes soon after March 25.

The Reason For Not Attending the Online Classes, as per the report:
• There are 72.2 % of the students who are not being able to attend the online classes on a regular basis, is because of poor internet connection.
• 11.6 % of the student mentioned financial incapability as the reason to not attend the online classes.
• Whereas, 7.6% mentioned that household activities are not allowing them to attend online classes.
• Some other reasons had been cited by the remaining 8.3 % of students. 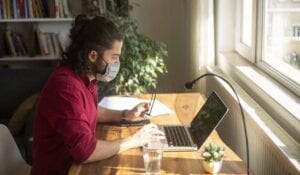 Abhigyan (single name), member AISA (DU unit) and a student at Ramjas College, said the student’s organization was approached by many Delhi University students who were finding it difficult to attend online classes. He further mentioned that the students were also worried about the University administration’s idea of conducting online exams. So we thought we should conduct a survey to get a clear picture of students’ opinions on online exams and classes and send it to the university administration.

Several students across the University are finding it difficult to attend online classes. Sandeep Kumar, a third-year student at Hindu College said, “ He had left for his village in Uttarakhand before the lockdown was announced and now faces connectivity issues while attending online classes and some of my friends who are in northeastern states have not been able to attend any classes at all until now because of poor internet connectivity. In such a situation, one cannot even think about taking online exams.”

The Delhi University administration had recently asked suggestions from various stakeholders on how exams should be conducted in the prevailing situation.
Rajesh Jha, a member of the University’s executive council, said the council has written to the DU administration several times against conducting online exams. He said that when they take an online class, usually 20 out of 45 students attend at a time. Many students call and text us explaining complications in attending online classes because of various reasons.”

A member of the University’s special task force constituted to combat the Covid-19 pandemic, requesting anonymity, said, “We are closely monitoring the situation and also accessing the number of students who are equipped with technology. Any decision on exams will be taken keeping in mind the interest of students.”

The University is also considering launching voice conferencing to help the students who do not have smartphones or other devices. The member added that they are planning to start classes via audio conferencing which needs no internet or smart devices.